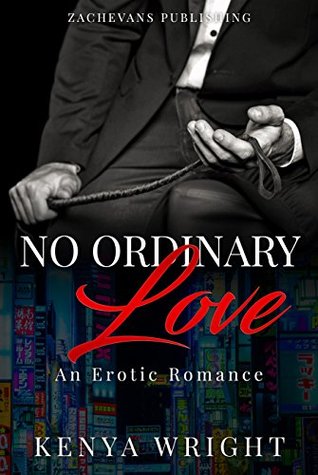 As I continue to make my way through Kenya Wright’s works, I’ve come across two that I feel are distinctive in their own way. In Mine, Wright takes a crack at the “white boy raised by black family” archetype, and, in No Ordinary Love, we finally meet the Dragon.

I know I said “‘Til Next Week” in my last few posts, but I don’t think I understood how tiring that next week would be. I mean, there’s just no excuse for how much I fell asleep in my chair trying to read different novels. This whole going back to work thing has been messing with my sleep schedule.

In any case, I had previously read the synopsis for Mine probably last month sometime, and originally passed over it. It’s essentially about a guy who ends up having to bodyguard the woman he’d been in love with for maybe a decade, because she’d somehow managed to get a crazy stalker. I don’t really like bodyguard stories, but I do like Kenya Wright, so when I had the space on my KindleUnlimited shelf, I went ahead and read it.

To be quite honest, Mine is probably one of the lesser Kenya Wright standalones, which, to me, means its solid story, but it has some “eh” moments, and you wouldn’t immediately jump to talking about it when pushing your favorite author. Part of it is because the main characters, Hunter and Zola, are adopted siblings, which, to a lot of us, would be weird. Even as a bonafide, WestAllen fan, I know this is weird. And I’ll give Wright the credit that she also knows this, and even has Hunter note that if it didn’t work out between Hunter and Zola, he could basically lose all the family that he has. Fair point made – in a nicer way than I would have put it.

Also Hunter’s active best friend – because his actual best friend, Zola’s brother, is barely on screen – is a Haitian assassin that is as superstitious as all get out, and very particular about how he wants to die. I didn’t care for this character, probably because I work with a ton of Haitians and saw none of them in him, but I can’t say it was wholesale offensive.

I think, what it really comes down to, is that by reading Mine, I’m really starting to see the growth in Wright’s writing.

The reveal of the stalker was definitely a surprise, but I don’t think they would have entered your mind if another character didn’t put it there. Whereas, in Missing Hearts, you as the reader may pick up on the possibility of the killer when his workplace is mentioned, but also might let it go when Wright gets into his age. I think that by the time she gets to Missing Hearts, Wright gets better at giving better clues, but also giving us great Red Herrings.

Quarantine & Chill has a wild death scene that is just as jarring as the one in Mine, but I feel like Wright really got better with the suspense and urgency of the moment by the time she got around to Quarantine. Admittedly the motives were different, and the stalker in Mine had no real intention of killing Zola, but I think the trajectory of both novels is derailed in the same way by these moments.

I like that Wright also returns to having the main characters get away and really get to know each other after a tragic event. Hunter and Zola really can’t do much else Mine, but it makes for a nice ending in Missing Hearts.

Lastly, I mentioned earlier that Wright takes a crack at the “white boy raised by black people” archetype; this is not a detractor. Wright’s Hunter is relatively natural, and the situation was ultimately for his betterment. I’ve only ever seen this in Amarie Avant’s The Good Mistress, but I’ve heard other readers say that it can lead to abrupt changes in not only a character’s speech, but his attitude as well. This is not the case with Hunter.

I know I spent a good portion of this review comparing Mine to some of Wright’s later works, but that doesn’t mean I wouldn’t recommend it. The characters were not unlikable, and the stalker had a relatively understandable reason for doing what he did. Again, it’s ultimately a solid story. I think anyone who likes Kenya Wright would appreciate this book, and note the growth in her writing style.

In No Ordinary Love, Kenji Sato meets the woman he wants to break him in Nyomi Palmer. In Kenji, Nyomi sees a sexy man who is also the ticket to her next bestseller. What they end up getting is so much more.

To be fair, No Ordinary Love is actually older than Mine by about 4 years, but I think I’m more biased toward it, because I finally get to meet this Dragon. I swear, the Dragon is probably mentioned once in passing somewhere in The Lion and the Mouse, but it was apparently enough to hook me. I didn’t care for the French guys and their shenanigans, but Japanese Mob Bae with the daddy issues is right up my alley.

That being said, No Ordinary Love is a different kind of Mob book.

I say this because most of the Mob Bae books I’ve read are all about family and whatnot, but Kenji is relatively alone. There is mention of “the uncles”, and a cousin shows up for like two seconds, but Kenji’s want for company is obvious. Nyomi’s not having any siblings isn’t surprising. I don’t know what Wright’s issue with biological siblings is, but most of her female characters – that I’ve read – do not have them or don’t get to keep them. Mine and Quarantine and Chill are the only times that someone got to have a sibling that lived, and we barely see them.

I think for both protagonists, No Ordinary Love, was more of an emotional journey. There was some action, and it was very sexy, but I think that both characters had to purge themselves of the damage done to them by their fathers. In a way, I also think that these two were also a precursor to The Lion and the Mouse’s Kaz and Emily in their having to learn how to be in an actual relationship.

I’ve seen some reviewers that noted their dislike for Nyomi as a character. Originally, I couldn’t understand it, but I remember there were points where I wondered why she would be so difficult. Ultimately, I think the only reason Nyomi never bothered me as a character is because her reaction to Kenji is relatively normal. He was intense and it was a lot, but I think that we as romance readers have gotten so used to this idea of an alpha male that we forget that that doesn’t go over well for everybody.

Ultimately, I loved No Ordinary Love because it gave me a better story than I expected. It works as a standalone – though I’d be grateful for a sequel – but it also fits very well in Wright’s Mobverse without actually name dropping anyone. I’ve seen a graphic of where No Ordinary Love is supposed to fit in regards to The Lion and the Mouse, but I personally think that, at this point, it doesn’t matter where you read it as these characters are not actively in play as yet.

I recommend this to those of us who like a good Dark Romance with daddy issues and ambiguous HEAs. This novel could do with a sequel or a novella to cement the relationship, but we all just have to assume that after Nyomi and Kenji have gotten through properly dating each other, they decide to marry and rule the Japanese underground together. I think that that’s the headcanon Wright wants us to have.

So this is where I am in my Kenya Wright journey: so far back, she’s with a different publisher. This is not the end, as Wright is still writing, and I still have quite a few more books to go. I think that there’ll be a good bit more reflecting as to how the older books compare to the newer ones, but I love to see the growth in my favorite authors.

As always, ‘til the next one.